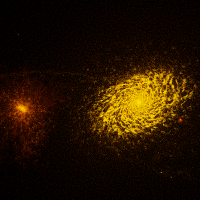 The McMaster Unbiased Galaxy Simulations (MUGS) are a series of cosmological zoom-in simulations of L* galaxies (such as the Milky Way). The MUGS simulations were originally reported in Bailin et al. 2010 Stinson et al. 2010, and were later re-simulated with updated hydrodynamics and sub-grid physics as MUGS2 in Keller et al. 2015 and Keller et al. 2016. Here you can find the initial conditions used for these studies in the Tipsy format that ChaNGa and gasoline both use. 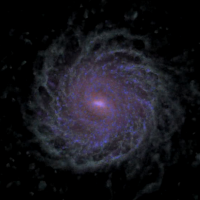 h277 is a Milky Way-like galaxy, simulated with GASOLINE. h277 has been used in a number of studies, which you can find in this ADS Library. The dataset includes all of the outputs produced by the simulation code, along with a parameter file to re-run, halo finder outputs, and a movie of the simulation evolution. This simulation has a mass resolution roughly 10x greater than MUGS2. The outputs of this simulation can be found in these 5 datasets: